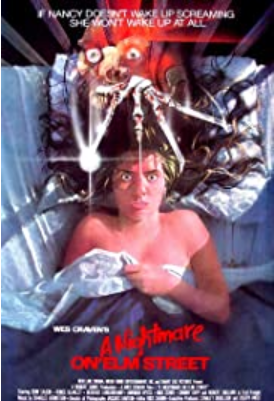 Fair use via IMDB

A “Nightmare on Elm Street” follows teenager Nancy Thompson as she is being haunted in her dreams. This film contains everything a horror movie should: jump scares, anticipation and lots of blood. Thompson actually had a plan for defeating the antagonist, Freddy Krueger. She was clever, possessing a rare type of intelligence for someone in a horror film. Thompson developed a plan to stop Freddy Krueger instead of acting like a sitting duck which created a level of awareness that I had been missing in the previous horror films I watched. It drew me into the plot and made me curious about how Thompson’s plan would play out. The use of creepy nursery rhymes added another level of eeriness to the film, which I really liked.

The music featured in the film is iconic; the soundtrack composer, Danny Elfman, also composed the music to several other famous films including “Edward Scissorhands” and “The Nightmare Before Christmas.” Throughout the film, there was a lot of blood in the scenes, but it looked fake enough not to scare me. As a result, some of the gory moments I found comical because they looked so unrealistic. The amount of blood felt appropriate for the film and I actually enjoyed some of the gorier aspects. Bloody violence is what I want and expect from a horror movie, which “A Nightmare on Elm Street” delivered. Additionally, there were not long pauses before the murders, and I was quivering with anticipation until the end. There is not a lot about the movie I did not like. However, I found the ending to the film perplexing. Instead of the ending being suspenseful, it was just confusing as I had no idea what happened to the antagonist. Overall, “A Nightmare on Elm Street” was an outstanding horror movie. I would strongly recommend it if you are looking for a scary film. Ranking: 4/5